On May 28, 2020, Fire Marshal David W. Hartley will retire after 28 years of service to the Town of Ocean City.  Beginning his career with the town in 1991 as a Fire Safety Inspector, Hartley performed many life safety inspections and was promoted to Fire Investigator and sworn Ocean City Police Officer in 1996.

Throughout his career he has held the rank of Chief at various levels for 20 years, as a Chief Deputy, Assistant Chief and ultimately appointed to Deputy Chief/Fire Marshal in 2011.  He was a founding member of the bomb squad upon graduating from the Federal Bureau of Investigation’s Hazardous Devices School in 2001, just prior to 9/11.

“It has been and honor working for the Town of Ocean City,” Hartley commented.  “I would like to thank the many brave professional employees in the Fire Marshal’s Office, fire department and police department who I have worked alongside for 28 years. I have had a blessed career and very grateful for the opportunity to serve the residents and visitors for so many years.”

According to Ocean City Fire Chief Richie Bowers, Hartley’s retirement is well deserved.   “Dave has spent 28 years upholding the mission of the Office of the Fire Marshal to protect the residents and visitors to this town,” Bowers stated.  "Chief Hartley also served as interim Fire Chief of the Ocean City Fire Department, overseeing all three divisions of the department."

Tim was promoted to a Fire Investigator and sworn Ocean City Police Officer, upon graduating from the Police Academy in 1997. Tim was promoted to a Deputy Fire Marshal II/Plans Examiner in 2003. Throughout his career he has served on numerous local and state task forces and committees representing the citizens of Ocean City, and was the Special Events Coordinator for over ten years. 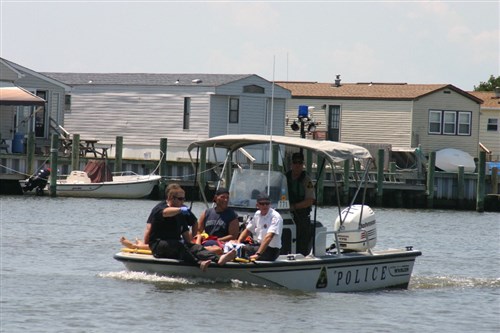