A man who had a long history of trouble with the law set his clothes on fire and ran into the rectory of an Episcopal church here, causing the blaze that killed him and the church's pastor, authorities say.

The Rev. David Dingwall, 51, was there with a male and female volunteer. At the time, the food pantry and clothing distribution site was not set to open for another 30 minutes.

The man later identified as Sterner "ran in screaming for help. He hugged one of the volunteers there, an adult female whose clothes were also ignited," said the Rev. Heather Cook of the Episcopal Diocese of Easton.

"This is just such a bizarre incident," she said. "It's bad enough to lose somebody, but right before Thanksgiving through a bizarre kind of fire, people are stunned. It's not just the parish. It's the whole Ocean City community. People are aghast."

Sterner and Dingwall died. The woman, whose name was not released, was taken to a Baltimore burn center where she remains hospitalized with life-threatening injuries. Bruce Young, the male volunteer, declined to be interviewed; he suffered and was not hospitalized.

Despite mentioning Sterner's self-immolation, authorities say the cause of the fire remains under investigation, and they have not reached any conclusions about how Sterner came to be on fire.

“It's bad enough to lose somebody, but right before Thanksgiving through a bizarre kind of fire, people are stunned.”

Dingwall was a Canada native with a wife and three sons who moved to Maryland's Eastern Shore in 2003 and became rector of St. Paul's by-the-Sea in 2005. His funeral will be Tuesday.

"Father David had the same passion I do in his desire to take care of the needy," said Pastor Rich Burkhard of Lands End Fellowship in Ocean City, whose group serves many of the same people as the Shepherd's Crook. "I had a tremendous amount of respect for him. If he could help, he would."

Although the building housing Shepherd's Crook was once the church's rectory, Dingwall did not live there, Cook said. It housed the food bank and church offices.

Firefighters found Dingwall unconscious on the second floor of the three-story rectory, a cedar-shake structure which was built in 1923. Witnesses said he was stricken by smoke and heat after he tried to retrieve his computer from the burning building, according to Cook.

The church itself, which was constructed in 1900, and its Red Doors Community Center had little damage.

Sterner was arrested 17 times since June 1994, according to Maryland online . The charges included assault, breaking and entering and malicious destruction of property; he's been convicted of drug possession and possessing an open container of alcohol in public. 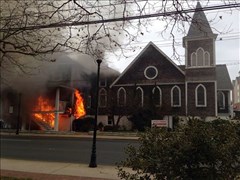 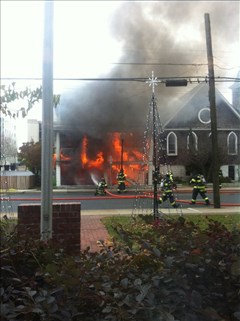 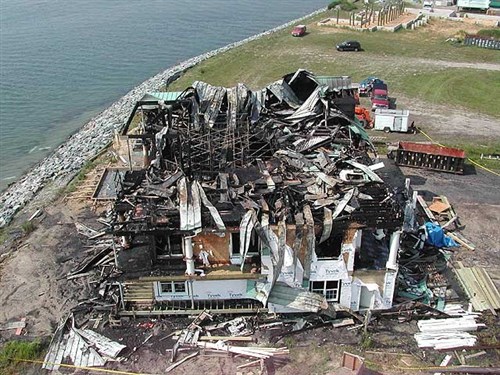